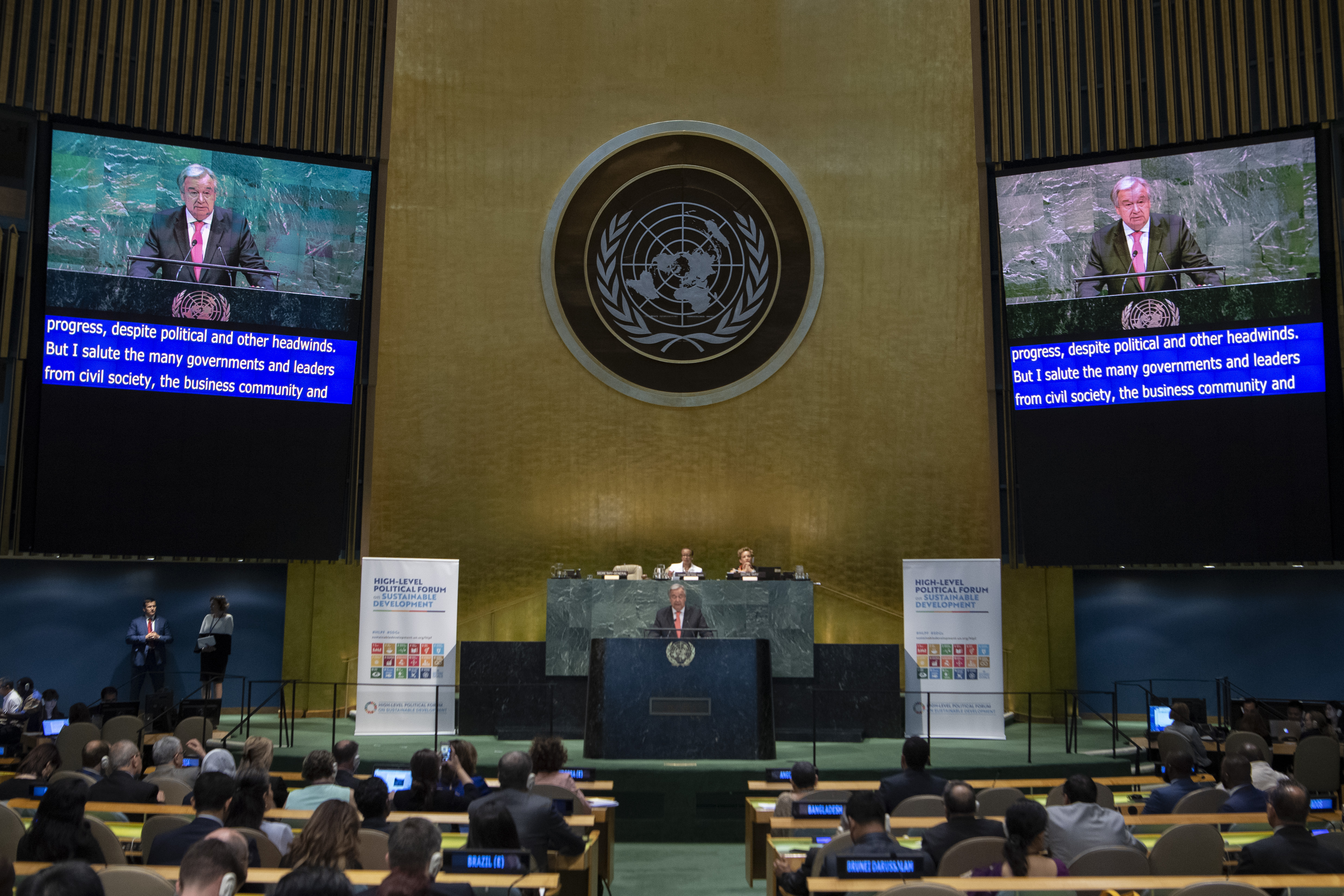 This year, nearly fifty countries will present voluntary national reviews. You are also analyzing progress on six individual Sustainable Development Goals and perspectives from countries in special situations. And you are zeroing in on the power of the SDG action to support empowerment, equality and inclusion.

As we look ahead to the critical Summits and High-level meetings this September, I would like to reflect more deeply on what I call the “Inclusion Imperative”. The evidence is clear: development is not sustainable if it is not fair and inclusive -- and rising inequality hinders long-term growth.

At the same time, we see mounting evidence of the transformative results of equality and inclusion -- particularly of women – in higher Gross Domestic Product, greater stability, and enhanced private sector performance and institutional effectiveness.

For all these reasons, the 2030 Agenda places the goals of inclusion, empowerment and equality, leaving no one behind at the heart of our efforts.

Yet, four years after its adoption, the global picture is unsettling.

Yes, we have made encouraging progress despite political and other headwinds. And I salute the many governments and leaders from civil society, the business community and many others who have risen to the 2030 challenge.

But we are not yet on track and must step it up.

Extreme poverty rates are falling but not fast enough to meet our goals by 2030.

Inequality between and within countries is disturbingly high. And people are rightly questioning a world where a handful of men, because indeed they are men - there is not one single woman in them, a handful of men, hold the same wealth as half of humanity.

Global unemployment levels have dropped since 2015, yet wage growth has stagnated; 30 per cent of young women and 13 per cent of young men are not in education, employment or training; and 4 billion people worldwide lack access to social protection.

Millions of women are demanding and winning gender-parity and equal treatment within the workplace, but far more remain excluded from employment in the first place.

No country in the world is on track to attain gender equality by 2030, and women continue to be hampered by discriminatory laws, unequal access to opportunities and protections, high levels of violence, and damaging norms and attitudes.

We see encouraging improvements in access to quality education and health care, to water and sanitation and to affordable clean energy, but we continue to struggle to reach those furthest behind, particularly groups such as adolescent girls and persons with disabilities.

Fair and efficient justice systems, so critical to inclusive development, remain beyond the reach of some 5 billion people.

Finally, climate change is moving faster than we are.

We have seen the shattering of three pivotal records before our eyes.

First, greenhouse gas concentrations in the atmosphere are at the highest levels in 3-5 million years – and that occurred at a time when the earth’s temperature was as much as 3 degrees warmer and sea levels as much as 10-20 meters higher.

Second, the World Meteorological Organization reports that our planet will record the five warmest years on record from 2015-2019. We need look no further than the heat waves in Europe, South Asia and elsewhere for yet more evidence of that.

Third, sea levels are not only rising – they are rising at an accelerated pace. Indeed, some scientists are already predicting that sea level rise could double from what is currently projected by the end of this century. And, of course, we know in all these areas the poorest and most vulnerable people and countries will suffer the most.

As we look ahead, there is much to be done. But allow me to highlight four key conclusions to advance the “Inclusion Imperative”.

First, we must dramatically scale up public and private investments for the Sustainable Development Goals, our best tool of prevention. Countries must reverse the downward trends of Official Development Assistance and faithfully meet their commitments under the Addis Ababa Action Agenda.

We must combine support to developing countries to mobilize domestic resources with global action to effectively fight illicit flows of capital, money laundering and tax evasion.

As we look to the future of work, we will need massive investments in quality education, rooted in not just learning but learning how to learn and being able to do so across the span of a lifetime. That must be coupled with a new generation of social protection initiatives in the context of the fourth industrial revolution and the progress of artificial intelligence.

And we must create the conditions for private sector development and long-term market investments that generate sustainable economic growth, decent work, and prosperity in rural areas.

Second, global climate action must be advanced in a manner that reduces inequality.

Shifting to a greener economy could create 24 million jobs globally by 2030 while safeguarding the 1.2 billion jobs that depend on a stable and healthy environment. But to do so, we must help people acquire 21st century skills as the world transitions from fossil fuels and boost investments in low-carbon, climate-resilient infrastructure that require these kinds of skills.

And we are counting on countries to fully replenish the Green Climate Fund and meet their commitment to mobilize $100 billion per year from public and private sources for climate action and mitigation and adaptation in developing countries by 2020.

Third, we must step up implementation of the Global Compact for Safe, Orderly and Regular Migration. Let us all remember that beyond the critical issue of securing borders, migration policies are about people with rights. Mothers, fathers, children, some of the world’s most vulnerable people. People whose vast contribution to sustainable development, in countries of origin and destination, is absolutely critical.

Fourth, leaving no one behind and achieving the Sustainable Development Goals is inherently linked to human rights, diplomacy and prevention. Fragile and conflict affected states, for example, are projected to be home to some 85% of those remaining in extreme poverty in 2030. We need a strengthened global commitment to end conflicts and displacement and tackle root causes. And let us all stand together for justice, tolerance, gender equality, and human rights.

These other conclusions emerging from this Forum are rooted in the pressing need to address the Inclusion Imperative and provide us with important insights as we look ahead to September.

World leaders will gather here for a series of critical meetings: The Climate Action Summit, The Sustainable Development Goals Summit. A High-Level Meeting on Universal Health Coverage. A High-Level Dialogue on Financing for Development. And a review of our commitments and partnerships to support Small Island Developing States and the SAMOA pathway.

I am asking leaders to come to the September summits not with beautiful speeches, but with concrete actions, plans and commitments to accelerate the implementation of the 2030 Agenda and the Paris Agreement on climate change.

The people of the world do not want half measures or empty promises.

They are demanding transformative change that is fair and sustainable. Let us use the world gathering in September to ratchet up the ambition and highlight the imperative of inclusion. And, together, let us kickstart a decade of delivery and action for people and planet. Thank you