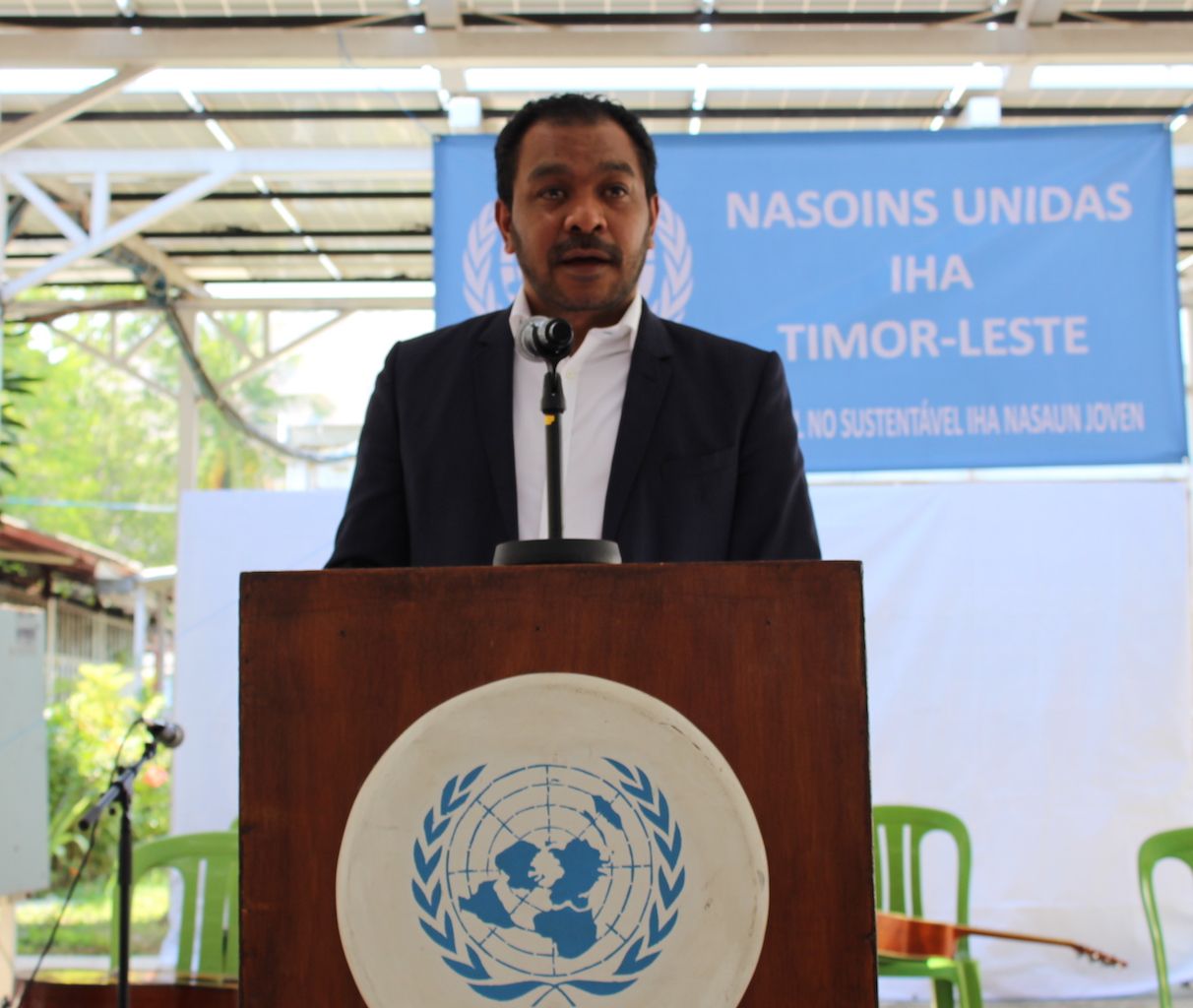 The United Nations Secretary General in New York has urged countries to accelerate efforts to meet the sustainable development goals which are designed to lift all people out of poverty by 2030.

The statement comes as the United Nations celebrates its 73 birthdays with a gathering of staff, students, diplomats and Timo-Leste government representatives at UN Haus in Caicoli.

The Resident Coordinator of the UN in Timor-Leste, Mr. Roy Trivedi in his UN Day speech to guests,  focused on water in Timor-Leste as one example of the need to move faster towards the targets.

‘’The Government of Timor-Leste was one of the first in the world to sign up to achieving the goals of the SDGs, but we are in danger of slipping behind on water,’’ Mr. Trivedy said.

‘’All of here today, the UN staff, the Government, the donors, partners and NGOs - all need to work better together to speed up the provision of safe drinking water for all people in the country.

‘’United Nations statistics show nearly half of all families in rural areas access water from unsafe sources, and 8 in 10 rural families walk more than 30 minutes to access water.

‘’More than half of the rural population do not have access to improved sanitation.

‘’And approximately half of schools (46%) in Timor-Leste don’t have access to water, and just 35 per cent have toilets.

‘’In most communities the burden of fetching and carrying water falls on women and girls, denying them the opportunities other have in the community to develop all their skills.

‘’The UN agencies WHO and UNESCO along with many other valuable contributors last year mapped out a water plan for Timor-Leste.

‘’In a year in which we are told that El Nino may reduce the length of the wet season and bring less rain than normal to many parts of the country, the need to conserve and use water wisely is more important than ever.

‘’The UN is moving from single use plastic bottles at meetings in our offices, to using the big water bottles. These can be purchased from Timor-Leste businesses, creating employment and job skills.

‘’The UN was officially launched on this day in 1945 with the signing - by nearly all nations of the world - of the first UN Charter.  So UN Day is a celebration of our ability to works towards something better together.

‘’The United Nations has been involved in the lives of all people in Timor-Leste since 1960 when it added the country to its list of non-self-governing Territories, putting on the global political agenda the right of the people of this region to self-determination.

‘’The UN has now moved from a long period as a peace-keeper to a development partner in Timor Leste, and we at the United Nations gladly take on the challenge set for us by the global community - 193 member countries of the United Nations - to help the government and people of Timor-Leste create a better world for all,’’ Mr. Trivedy said.

‘’The role of the UN in Timor-Leste is to help the government achieve its objectives for meeting the Sustainable Development Goals,’’ Mr. Trivedy said.

‘’I would like to thank the Government of Timor-Leste for its strong and continuing support to the United Nations.

‘’Timor-Leste has been a champion of multilateralism. The UN in Timor-Leste is listening to the government as well as the private sector, to our donors and partners.

For more information or to interview Mr. Trivedy contact:

Email: This email address is being protected from spambots. You need JavaScript enabled to view it.