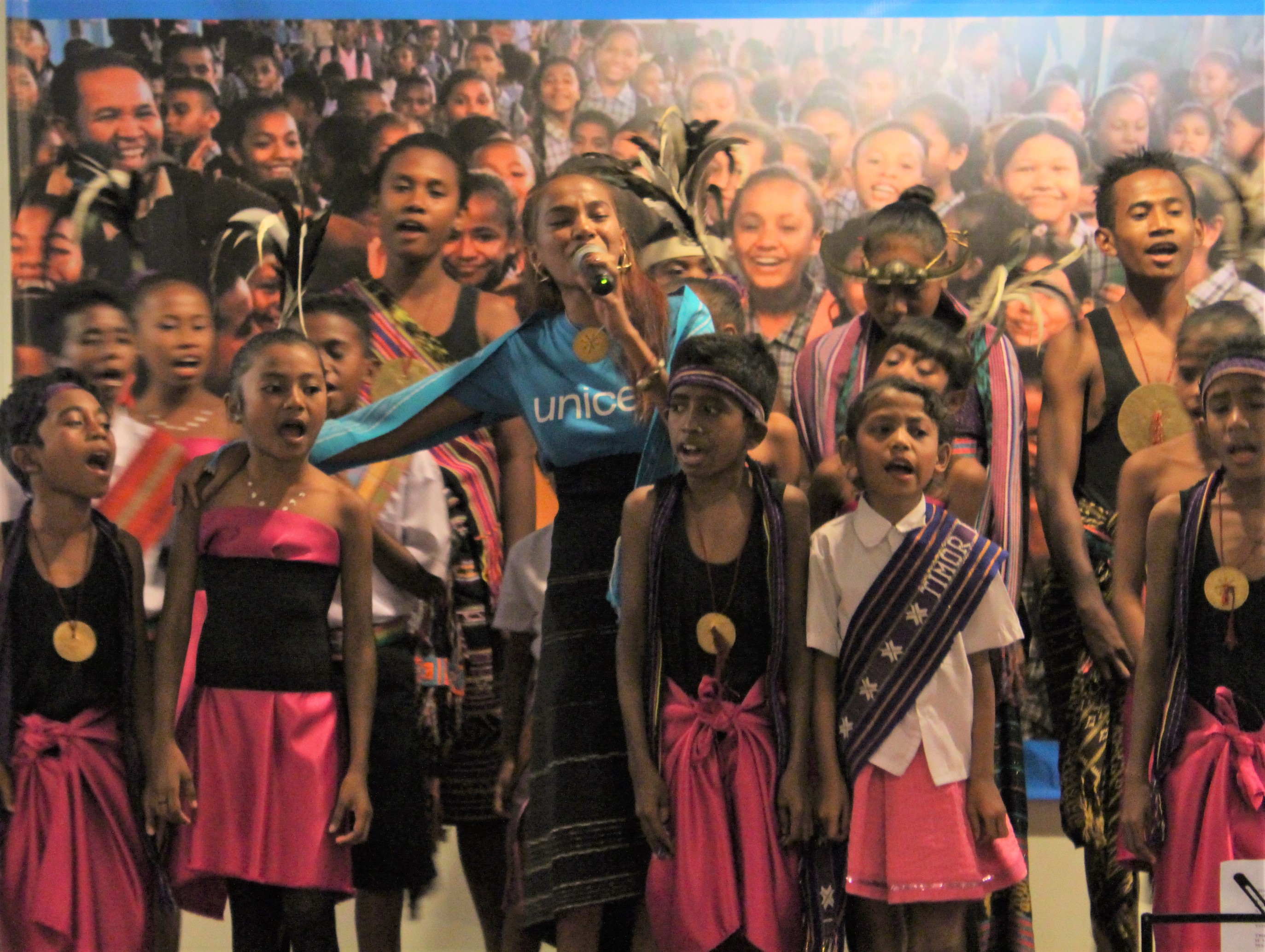 Mardi sings with the children at Timor Plaza.(Pic UN)

DILI, 07 May 2019 –  Famous singer and 2018 winner of The Voice Portugal, Maria Vitória da Costa Borges (Marvi), has been announced as the first Youth Advocate for UNICEF Timor-Leste.  Known as "Marvi", the 18 years old singer has come together with UNICEF to promote youth voices and raise awareness of issues affecting children. Marvi and Valerie Taton, UNICEF Representative in Timor-Leste, signed an agreement to formalise the appointment, which also marked the 30 years celebration of the Convention on the Rights of the Child (CRC).

"I'm proud to be a UNICEF Youth Advocate and a voice for the young people of Timor-Leste," said Marvi after signing the agreement. "Young people represent nearly half of my country's population - and represent our future. I'm looking forward to working with UNICEF, meeting with children and young people, learning their stories and raising their voice."

This is the first time the UNICEF Timor-Leste country office has engaged a Youth Advocate. Marvi joins a global, growing list of well-known and highly respected personalities from various fields including sports, music, the performing arts and film, among many others, who play an important advocacy role in support of UNICEF's work globally.

"I'm delighted to welcome Marvi as our Youth Advocate. I'm confident that she will act as a champion of youth voices in this country," said Valerie Taton, welcoming Marvi into the UNICEF family. "In her role as UNICEF's Youth Advocate I believe Marvi will use her passion to promote awareness of the issues that children are facing in Timor-Leste and will advocate for the rights of young people."

Marvi will volunteer her time as a Youth Advocate with UNICEF for one year from May 2019 to May 2020. She will work to raise awareness of issues affecting the lives of children and young people, including access to quality education, safe learning spaces, child health, and the challenges and opportunities for young people, across various platforms.

Marvi has been passionate about singing from an early age – at the age of three, she joined a singing competition organised by UNICEF in the Internally Displaced People (IDP) camps set up during the 2006 crisis. The competition was part of a suite of activities organised by UNICEF to provide psychosocial support to the children living in the camps. Her journey as a singer has since continued, with Marvi participating in many singing competitions at both the national and international level and winning several prestigious awards.

The signing ceremony was attended by a number of dignitaries including Manuel Carceres da Costa, the Minister of Justice, Mericio Juvinal dos Reis Akara, the Secretary of State for Social Communication, Nélio Isaac Sarmento, the Secretary of Youth and Sport, and Roy Trivedi, Resident Coordinator, United Nations.

Following the signing event, Marvi and Valerie Taton attended an open discussion with young people followed by a cultural programme with performances by children alongside Marvi.

###
About UNICEF
UNICEF works in some of the world’s toughest places, to reach the world’s most disadvantaged children. Across 190 countries and territories, we work for every child, everywhere, to build a better world for everyone.

For more information about UNICEF and its work, visit: www.unicef.org/timorleste