The Special Rapporteur on the rights of indigenous peoples, Ms Victoria Ms. Tauli-Corpuz, shares her end of mission report with the media in Dili, 16 April 2019. (Pix: UN)

DILI/GENEVA (16 April 2019) – The UN Special Rapporteur on the rights of indigenous peoples, Victoria Tauli-Corpuz, says Timor-Leste’s drive to promote indigenous customary practices has contributed to the progress in building the nation since the restoration of independence less than 20 years ago.

“I am impressed by the pride the Timorese take in their cultural heritage and how indigenous practices have translated into important gains in environmental protection and biodiversity,” she said. “These can serve as inspiring examples for other countries.”

For most Timorese, customary practices are an integral part of everyday life and play a central role in resolving disputes between individuals and communities, such as land disputes, conflict between communities and natural resources management. These practices focus on maintaining community and environmental harmony, in contrast to the formal justice system, which is perpetrator focused.

“Ensuring justice for all is a key objective of Sustainable Development Goal 16 and Timor-Leste could provide important lessons for other countries,” Tauli-Corpuz said.

“There are however customary justice practices that need to be amended to comply with human rights standards, such as physical punishments and public communal hearings which are clearly unsuitable for crimes relating to vulnerable victims of domestic violence and child abuse,” she said.

In this regard, the United Nations Declaration on the Rights of Indigenous Peoples affirms the right to maintain and strengthen indigenous legal institutions and juridical systems or customs, with the caveat that these should be in accordance with international human rights standards.

“Customary justice practices by indigenous peoples are not static and in my experience indigenous communities are generally open to incorporating human rights guarantees in their practices,” the expert said. “This change needs to come from within indigenous communities, but can be encouraged by increased awareness raising of international and national legal standards through culturally appropriate dialogue. In this regard, I wish to note that such dialogue needs to aim at mutual exchange of how both systems can address their shortcomings and increase knowledge of procedures and best practices in the respective systems.”

“I urge the Government to assign adequate resources to the Strategic Development Plan 2011-2030 and the 2017 SDG Roadmap and call on the Government to increase the production of indigenous crops to address the incidence of malnutrition,” Tauli-Corpuz said.

Education is intrinsically linked to achieving developments related to poverty reduction and health. “I call on the Government to take further measures to revitalise and promote the more than 30 indigenous languages in Timor-Leste and to expand education in mother tongue in order to improve educational results,” she said.

The expert held meetings in Dili and visited indigenous communities in Ermera, Liquica and Atauro.

A statement of her preliminary findings addresses a range of issues including customary and formal justice systems, lands and territories, conservation, climate change, education, poverty and malnutrition. The full report from her mission will be presented to the Human Rights Council in September 2019. 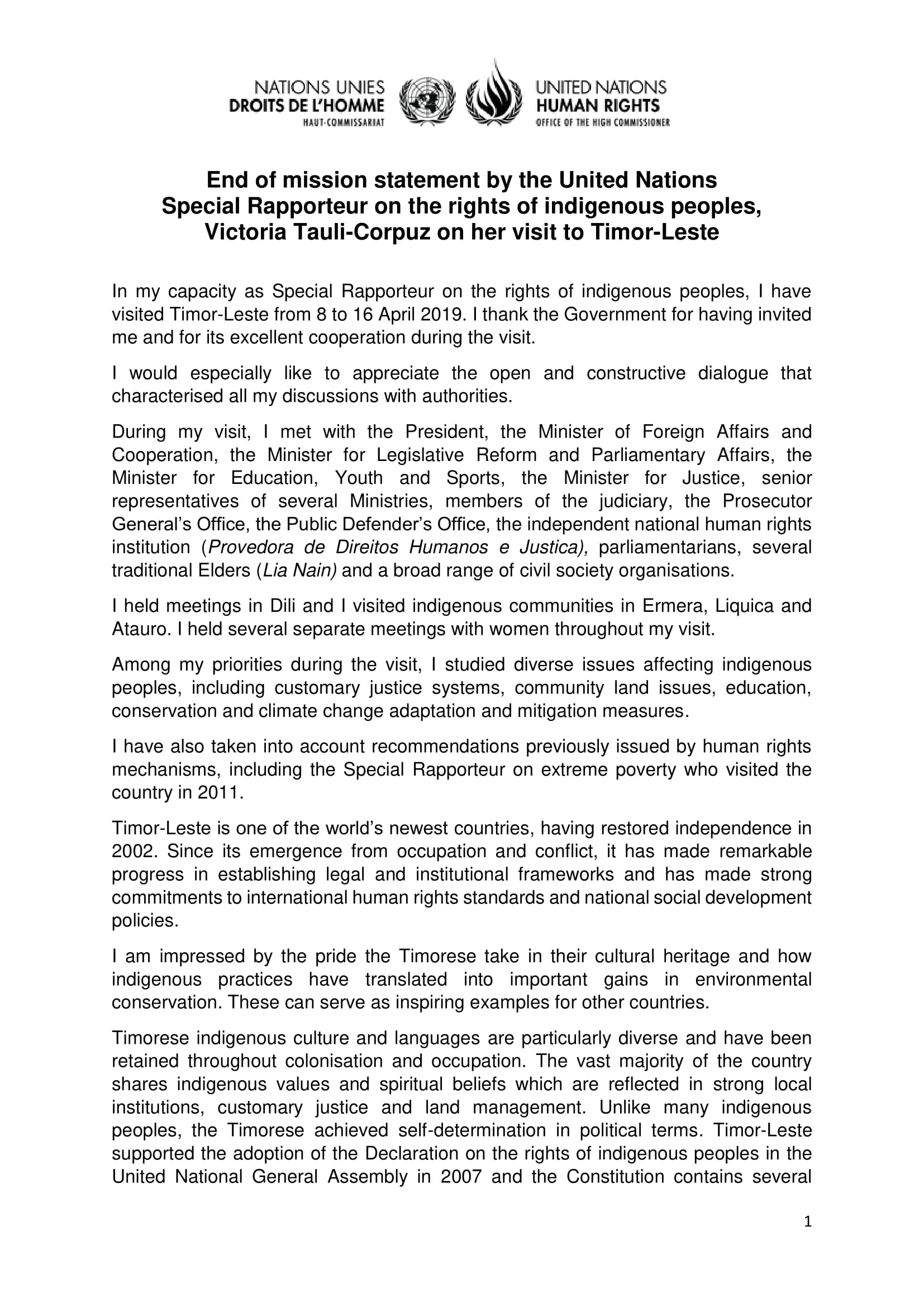 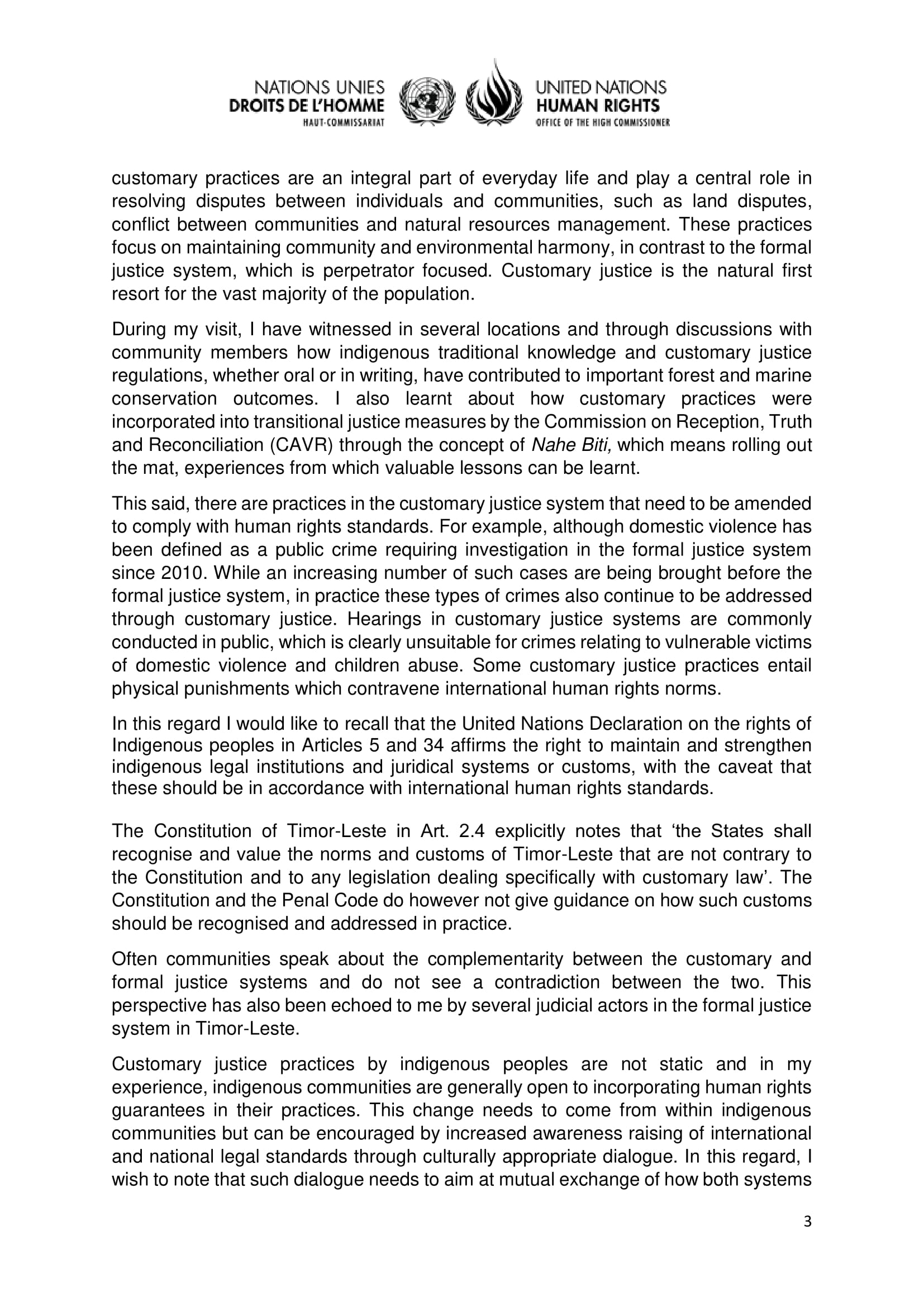 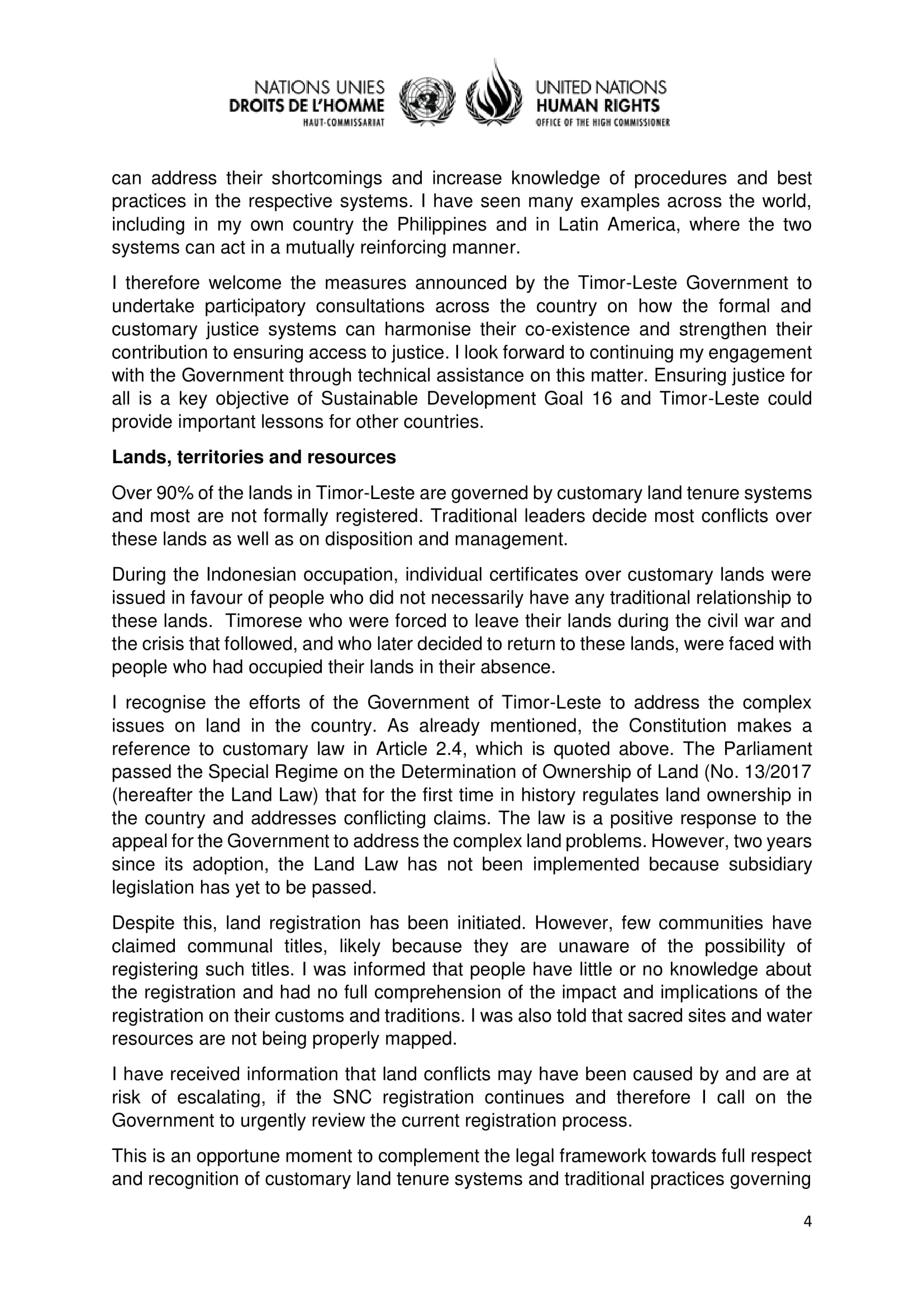 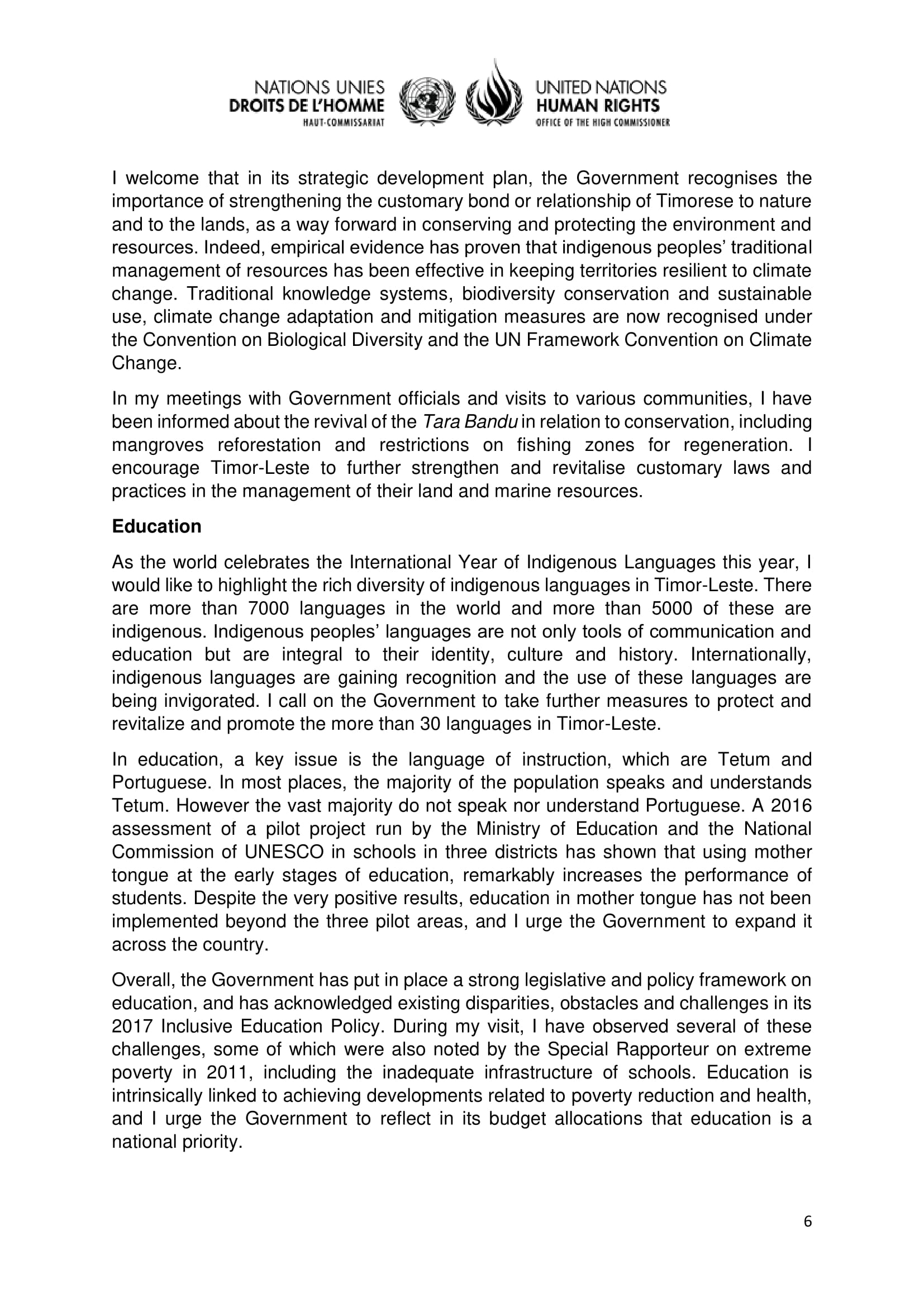 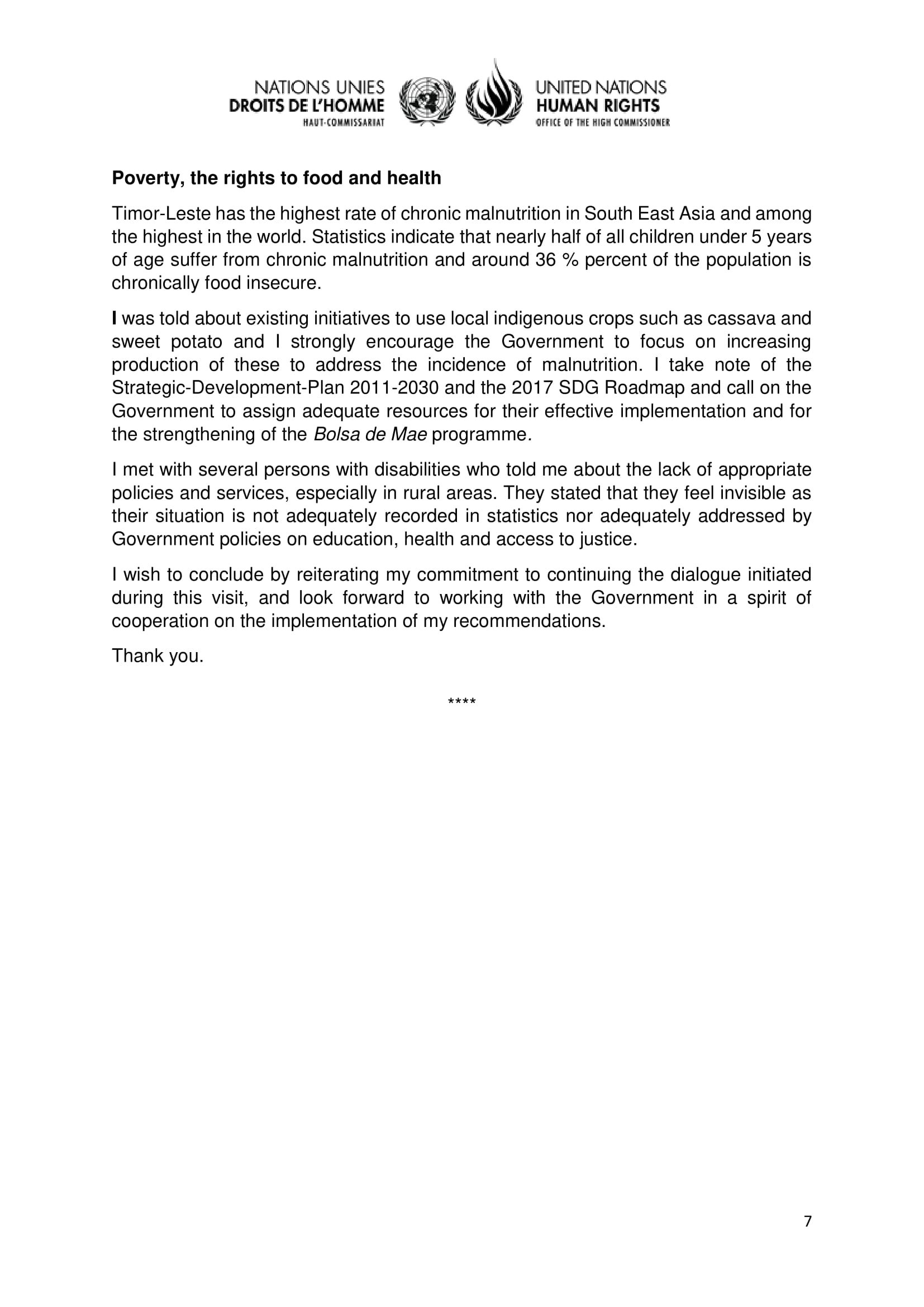