“Now I take the decisions... I don't wait for my supervisor to approve everything.”

Becoming a leader can be challenging for women living in Timor-Leste, especially in rural areas. However, the non-government organisation (NGO) Ba Futuru with the support of UN Women, and generous funds from the Government of Japan, have been planting seeds in this area that, with support from families, friends and the community, are starting to bear fruit. 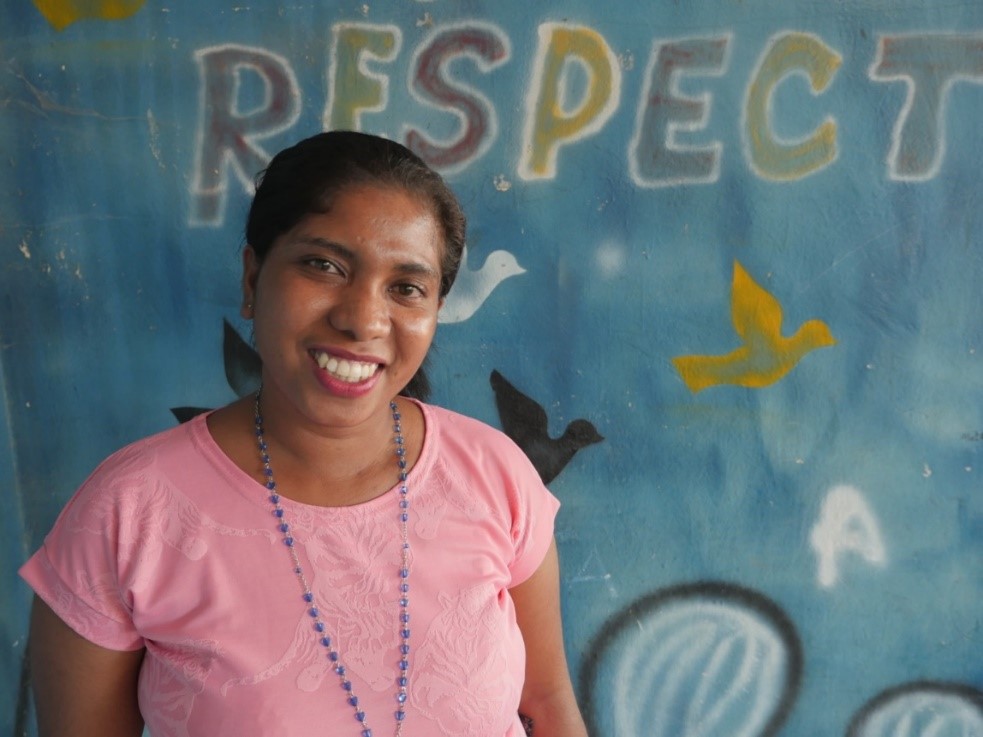 Hilaria from the Covalima Community Centre at one of Ba Futuru’s leadership workshops.

She credits her newfound confidence to the work of Ba Futuru (which is Tetun for “For the Future”). “They trusted me to be the focal point for this project in Covalima. I gained confidence in my ideas. Now I take the decisions, after consulting with beneficiaries. I don’t wait for my supervisor to approve everything.”

Leading for equality at the office and in communities

Ms. Amaral do Carmo was one of two women and three men from Covalima who participated in Ba Futuru’s leadership training. “With my co-facilitators, we have applied our skills to continue trainings on women’s leadership to 97 people (5 men, 92 women), including women’s groups and community leaders,” she explains.

She jumps in our car and proudly guides us to meet with some of the women community based organisations (CBOs) supported by her organization, the Covalima Community Centre (CCC). We meet Monica Moniz, who is heading a group called Halibur Maudemo, a group of 10 women in the Maudemo village of 2,524 inhabitants. She welcomes us into her house, where she also hosts the group meetings.

As with most CBOs, the women come together to support each other with economic activities such as savings and loans. The groups give the members a sense of security, as they help each other out in difficult times. Monica feels that the training from Ba Futuru, which is then passed down by Hilaria Amaral do Carmo from CCC, has done more than help her to lead her group. She shared how the leadership skills have allowed her to discuss with her husband about sharing roles and responsibilities.“My husband and I share our household tasks. When I have to go to the market, he will take care of the children. He will even cook. This allows me to continue and strengthen my economic activities.” 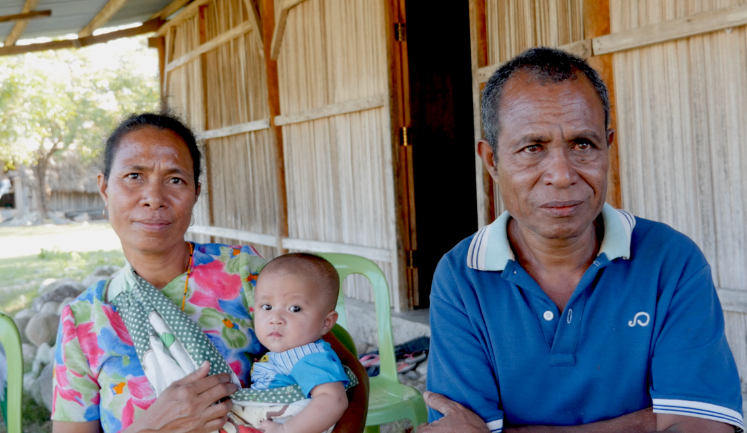 Husband Norberto Oliveira da Silva with his wife and granddaughter said “through this training I learnt that men and women can help each other. Men can go to the market. Men can work in the house.”

We then continue on the road to meet with the weaver’s group Fitun Naroman (Bright Star) near the main city of Suai. The homes in their village are mostly tall traditional pillar houses covered with the colourful woven doors, which stand in contrast to the electricity cables on the houses. 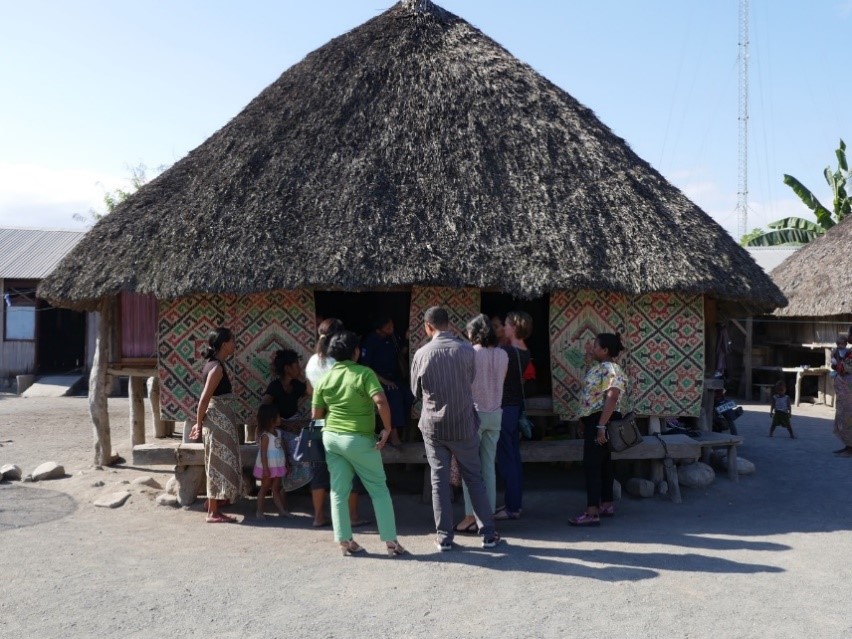 The members of the group are waiting for us. They are keen to show us their work which is based on the ancestral skill of traditional tais weaving, which is often passed down from mother to daughter. This tradition is losing ground as many weavers prefer to buy the ready-made dyed threads from Indonesia. Different ethno-linguistic groups have their own patterns. One piece of woven cloth takes about one month – more if the weaver has to take care of children or perform household chores. The group was established in 2010, with the support from CCC and other partners. CCC facilitated trainings on using traditional dyes to weave their cloth, which allows them to sell their product for a higher price.

CCC’s leadership skills, some which were deepened through the training facilitated by NGO Ba Futuru, has resonated with the group members. They reported to be motivated to take greater responsibility in the community and to believe in their own leadership capacity. The group leader since 2016 is also the chief of the aldeia, or hamlet, and she aims to stand for the position of suku or village chief in the next village elections.

The leadership program also aims to improve women’s confidence, which is something that still remains a barrier to their participation in many aspects of governance and civil society, especially outside of the capital Dili, despite some progress in recent years. Responding to this challenge, Ba Futuru has been conducting behaviour-change campaigns and community training since 2004 in the three municipalities of Baucau, Covalima and Oecusse. The focus is on women’s empowerment, leadership, human rights, child rights, child protection, education and conflict resolution and transformation. Ba Futuru has partnered with UN Women under its Women, Peace and Security (WPS) programme since 2017 to train 14 women and men to become leaders and provide mentoring to 19 women community leaders. 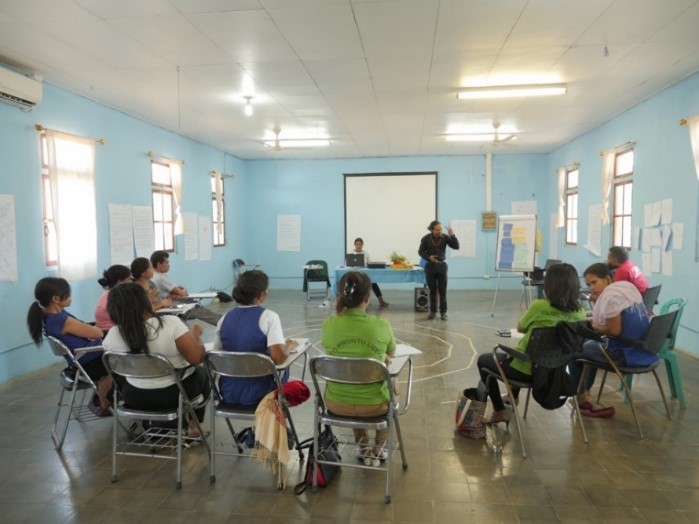 One of Ba Futuru’s leadership workshops.

Women, Peace and Security, from Past to Present to Future Possibilities

Timor-Leste has a longstanding and vigorous women’s movement. This small nation, which has just celebrated 20 years since the referendum that led to independence, can teach the world a lot about women’s leadership and participation. The many years of the independence struggle crafted the resilience of the women of Timor-Leste, with early role models including Rosa ‘Muki’ Bonaparte, an activist for independence and women’s rights who was executed in 1975 during the Indonesian military invasion of Timor-Leste.

When Timor-Leste regained its independence in 2002, Timorese women did not watch as observers from the sidelines as the country developed. Actively advocating for equal rights and elimination of discrimination, today, women hold 40% of seats in Timor-Leste’s Parliament. This has been supported, in part, by a minimum quota of one-third women on all party candidates lists.

However, these advances aren’t always evident outside the capital. The municipality of Covalima is a striking example. The administration only has two women out of 48 personnel, and of the 30 villages, only one Village Chief is female. Timor-Leste is changing and developing rapidly. The next step in the state-building process is decentralizing government to strengthen the municipalities. If this process is to be successful, women must have an equal role at the planning table and opportunities to apply their skills and develop their potential as leaders of the young nation.

The work supported by Ba Futuru is part of UN Women Timor-Leste’s efforts to advance the Women, Peace and Security Agenda via women’s meaningful leadership and participation in peacebuilding and is generously funded by the Government of Japan.