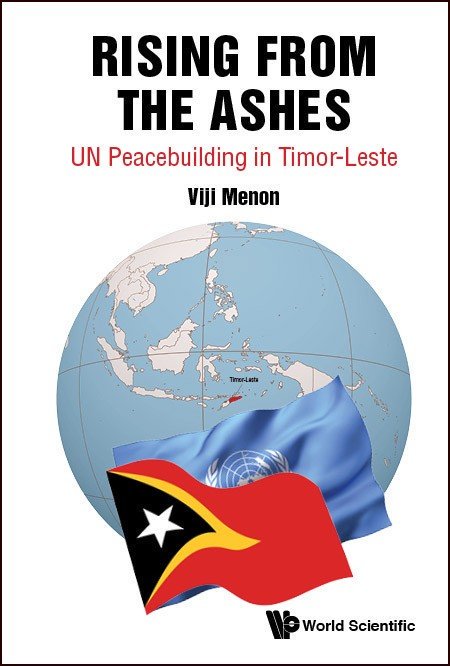 Rising from the Ashes: UN Peacebuilding in Timor-Leste by scholar Ms Viji Menon provides an in-depth look into the UN's first experiment in governing and building peace in the aftermath of conflict, using East Timor as a case study. It examines how the Timorese have progressed after the UN left and the challenges that lie ahead. The book is covered in two parts: in the first part, the book examines the UN's role after it entered East Timor in 1999 as the de facto government; and in the second part, the book examines how Timor-Leste has progressed in peacebuilding after the UN's withdrawal in 2012.

Rising from the Ashes: UN Peacebuilding in Timor-Leste is based on the author's first-hand experience working in the UN as it restored law and order and built a state in a country without a government, any infrastructure, or human resources. The book argues that peacebuilding is a long-term endeavor and is a work in progress in Timor-Leste, based on the good foundations laid by the UN. However, like many other developing countries, Timor-Leste has enormous challenges to address; but it also has oil resources and a young population. Its future success will depend on how its oil wealth is managed and distributed, whether it is able to bridge the urban–rural divisions in the country, provide employment for its burgeoning population, and progress economically. Last, but not least, its future success will also depend importantly, on how its leadership deals with past, namely, the continuing intra-elite divisions that are a legacy of its troubled history. They have to transcend past divisions and unite Timorese society for the future development of the country.

The book ends with a set of recommendations for Timor-Leste and for the region, namely members of the Association of Southeast Asian Nations (ASEAN).